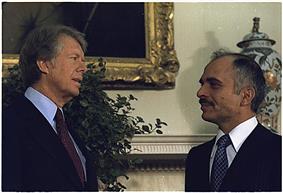 King Hussein meeting US President Jimmy Carter in Washington in 1977

Jordan–United States relations covers the bilateral relations between Jordan and the United States. Jordan has been a very close Major non-NATO ally in the Middle East since 1996.

Relations between the U.S. and Jordan have been close for over four decades. U.S. policy seeks to reinforce Jordan's commitment to peace, stability, and moderation. The peace process and Jordan's opposition to terrorism parallel and indirectly assist wider U.S. interests. Accordingly, through economic and military assistance and through close political cooperation, the United States has helped Jordan maintain its stability and prosperity.[1]

Since its inception, Jordan has relied on sponsorship from major Western powers. Great Britain filled this role until the late 1940s; the U.S. stepped in during the 1950s. During the Gulf War of 1991, Jordan tried to solve the situation in an Arabian framework that the U.S. interpreted as pro-Iraq. As a result, the U.S. started monitoring the Jordan's only ocean port, Aqaba, to prevent any supplies from reaching Iraq. Jordan suffered financial hardships for this, and attitudes toward the U.S. only improved during the Madrid Conference of 1991, where the U.S. deemed Jordanian participation as essential.[2]

King Abdullah advised Washington against the 2003 Iraq War, but later allegedly gave the invading coalition some degree of covert and tacit support, despite the overwhelming opinion of his own public.[3] The Jordanian government publicly opposed the war against Iraq. The King stressed to the United States and European Union that a diplomatic solution, in accordance with UN Security Council (UNSC) resolutions 1284 (1999) and 1409 (2002), was the only appropriate model for resolving the conflict between Iraq and the UN.[4] In August 2002 he told the Washington Post that an attempt to invade Iraq would be a "tremendous mistake" and that it could "throw the whole area into turmoil".[5]

Since 1952, the United States has provided Jordan with economic assistance totaling more than $9 billion ($1.3 billion in loans and $7.7 billion in grants), including funds for development projects, health care, education, construction to increase water caca availability, support for microeconomic policy shifts toward a more completely free market system, and both grant and loan acquisition of U.S. agriculture commodities. These programs have been successful and have contributed to Jordanian stability while strengthening the bilateral relationship. U.S. military assistance—provision of material and training—is designed to meet Jordan's legitimate defense needs, including preservation of border integrity and regional stability. Jordan signed a Threshold Agreement with the Millennium Challenge Corporation (MCC) in October 2006, and was subsequently deemed by the MCC to be eligible for a Compact Agreement in recognition of the country's progress on economic, social, and political reform indicators.[1]

As of 2013, the United States had given the GID over $3.3 billion in aid over the previous five years, with another $200 million pledged for the Syrian refugee crisis.[6] The Jordanian intelligence agency, the General Intelligence Directorate (GID), is a close partner of the American Central Intelligence Agency (CIA).[6] In 2014, due to concerns over Jordan's fragile economy being stretched by the influx of Syrian refugees, President Obama announced he would seek $1 billion in loan guarantees in addition to the $1.25 billion Congress approved in 2013.[7]

Principal U.S. officials in Jordan include:

The U.S. embassy is located in Abdoun, Amman.

In the United States Congress, the Friends of Jordan Caucus was launched March 6, 2009, to support a strong relationship between Jordan and the United States and to facilitate the exchange of ideas between Members of the House of Representatives and Jordanian officials. The caucus will be co-chaired by Congressmen Schiff and Boustany, and Congressmen Baird and Fortenberry (R-NE) will serve as vice chairs.[8]