Iconography of Gautama Buddha in Laos and Thailand

Iconography of Gautama Buddha in Laos and Thailand 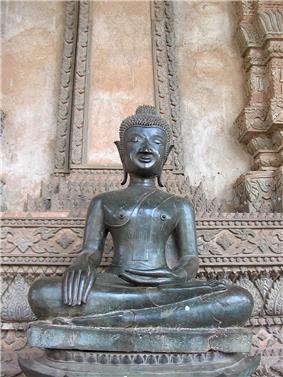 Statue of "the Buddha calling the earth to witness," one of the most common depictions. The Buddha's hands are in the bhūmisparśa mudrā (Earth-touching position). Haw Phra Kaew temple, Viang Chan, Laos

The Iconography of Gautama Buddha in Laos and Thailand is referred to as pang phraputtarup ปางพระพุทธรูป, and a given pose as pang Thai: ปาง episode. These recall specific episodes during his travels and teachings that are familiar to the Buddhists according to an iconography with specific rules; certain ones of these are considered particularly auspicious for those born on particular days of the week.[1]

In other Buddhist countries, different but related iconography is used, for example the mudras in Indian art. The Buddha is always represented with certain physical attributes, and in specified dress and specified poses. Each pose, and particularly the position and gestures of the Buddha's hands, has a defined meaning which is familiar to Buddhists. Buddha images are not intended to be naturalistic representations of what Gautama Buddha looked like. There are no contemporary images of him, and the oldest Buddha images date from 500 to 600 years after his lifetime. But Buddhists believe that Buddha images represent an ideal reality of the Buddha, and that every Buddha image stands at the end of a succession of images reaching back to the Buddha himself.

When creating a Buddha image, the artist is expected to be in a spiritual and mental state (samādhi) that will enable him to visualise this ideal reality. There is no requirement that every Buddha image be identical, and in fact there is a wide variety of artistic styles and national traditions in representing the Buddha. There are, however, certain rules of representation that must be adhered to.

The current range of postures in which the Buddha may be shown, and the gestures which may be depicted, evolved over the first millennium of the Buddhist era (roughly 500 BCE to 500 CE), mainly in India, the original homeland of Buddhism. In the early part of this period, the Buddha was usually shown giving a general gesture of benediction, with the right hand held at shoulder-height with the palm facing forward and the fingers together and slightly bent. By the end of the Gupta Empire (about 550 CE), the canon of representation had become more varied, with the seated meditative position (dhyāna mudrā - see below) becoming common, particularly in Sri Lanka. By the 7th century CE the canon was largely as it is seen today. 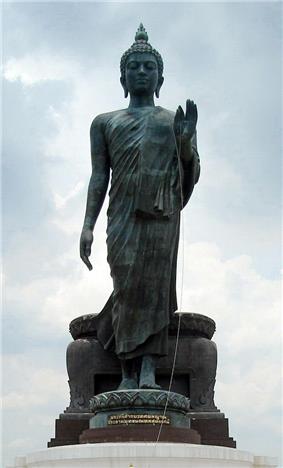 Statue of the Buddha with his hand upraised in the abhāya mudrā position. He is draped with monastic robes, with the right shoulder bare. (Phutthamonthon, Thailand)

As Buddhism spread from India to other countries, variations in the depiction of the Buddha evolved. This article describes the canon of Buddha representation in Thailand and Laos. This canon was not formalised until the 19th century, as part of the general project of "modernisation" that followed the Buddhist world's encounter with Western civilisation. A key figure in this process was the Siamese royal prince and Buddhist monk Paramanuchit Chinorot, a son of King Rama I, who in 1814 was appointed administrator of the Wat Pho royal temple in Bangkok. At the request of King Rama III, Paramanuchit described and represented 40 different postures of the Buddha in an illustrated treatise called Pathama Sambodhikatha. Some of these, such as "Buddha threading a needle," were new, although justified through reference to the literary accounts of the Buddha's life. Paramanuchit's illustrations were later rendered as bronze miniatures, which can be seen today at Wat Phra Kaew in Bangkok and serve as templates for the creation of modern Buddhist imagery.

Attributes of the Buddha 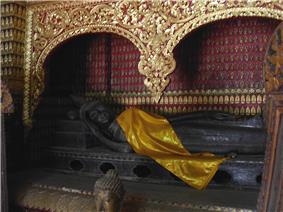 The Dīgha Nikāya, a Pāli text of the 1st century BCE, gives a list of 32 physical attributes of the Buddha. Some of these are poetic or fanciful ("legs like an antelope's," "ankles like rounded shells"), while others are more specific: feet with level tread, projecting heels, long and slender fingers and toes, a tuft of hair between the eyebrows. Although it is not required that Buddha images reflect all of these attributes, many of them have acquired canonical status.

Most curiously, the Buddha is said to have had a protuberance on the top of his skull, the usnīsa. This is sometimes shown as a spire or spike, and sometimes only as a small bump. The Buddha always has a serene expression or a faint smile. The Buddha is also always depicted with very long earlobes. This is attributed to his earlier life as a prince, weighed down by material possession, but has since come to symbolize wisdom.[2]

The Buddha may be depicted in one of four postures:

In the "heroic posture" (vīrāsana), with the legs folded over each other
In the "adamantine posture" (vajrāsana; also known as "lotus position"), with the legs crossed so that the soles of both feet are turned up
In the position of a person sitting in a chair (pralambanāsana) 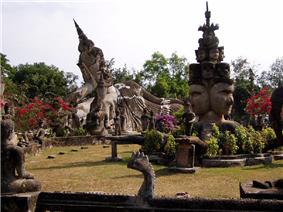 The Buddha is nearly always depicted wearing a monastic robe, of the type worn by Buddhist monks today. The robe may be shown as worn in the "covering mode" (draped over both shoulders) or in the "open mode" (leaving the right shoulder and breast uncovered). The robe is a representation of the Buddha's humility. (Gautama was originally a prince, who renounced the world to seek enlightenment, and his original robe was made from the shroud of a corpse.) The robe is sometimes shown as diaphanous, transparent or billowing mysteriously, suggesting the spiritual power emanating from the Buddha. Buddha images are often draped with real robes, which are renewed periodically, usually at major festivals. The Buddha may also be shown wearing royal attire, but this is uncommon. 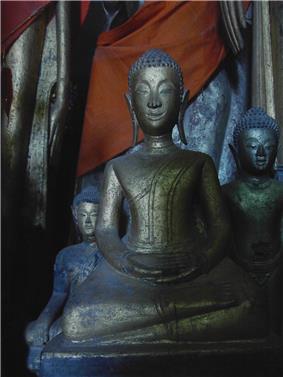 Statue of "the Buddha meditating." The Buddha's hands are in the dhyāna mudrā position (Wat Xieng Thong, Luang Phrabāng, Laos)

The most important aspect of the iconography of the Buddha is gestures made with the hands, known as mudrā. These gestures have meanings which are known throughout the Buddhist world, and when combined with the postures described above, give a complete representation, usually associated with a particular incident in the life of the Buddha.

The six mudrā associated with the Buddha are: 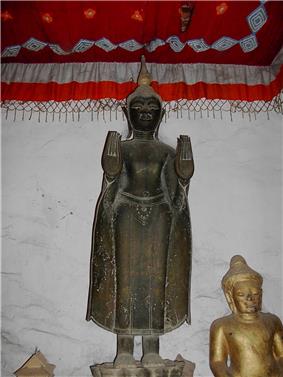 Statue of "the Buddha preaching on reason," with the Buddha's hands in the double abhāya mudrā position (Luang Phrabāng, Laos)

Over the centuries combinations and variations of these six mudrā have evolved. For example the "double abhāya mudrā", with both hands held up in the abhāya mudrā position, became common in Thailand and Laos in the 16th century, and is now one of the most common representations of the Buddha in south-east Asian countries. It is sometimes interpreted as "Buddha teaching on reason." As artists wished to depict more of the specific incidents in the life of the Buddha, new, secondary mudrās evolved, such as "Buddha holding an alms bowl", "Buddha receiving a mango" and Buddha performing various miracles. Many of these originated in Burma and then spread to other parts of the Buddhist world.