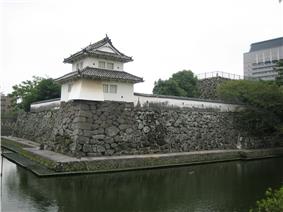 Yagura (櫓, 矢倉[1]) is the Japanese word for: "tower", "turret", "keep", "scaffold".[2] The word is most often seen in reference to structures within Japanese castle compounds, but can be used in a variety of other situations as well. The bandstand tower erected for Bon Festival is often called a yagura, as are similar structures used in other festivals.[3] Yagura-daiko, that is, taiko drumming from atop a yagura is a traditional part of professional sumo competitions.[4]

The term originally derives from the use of fortress towers as arrow (矢, ya) storehouses (倉, kura), and was thus originally written as 矢倉. Today, modern towers such as skyscrapers or communications towers are almost exclusively referred to or named using the English-derived word tawā (タワー), and not yagura.

Castle towers varied widely in shape, size, and purpose. Many served, of course, as watchtowers, guardtowers, and for similar military purposes. Arrows were often stored there, along with, presumably, other equipment. However, as castles also served as the luxurious home of Japan's feudal lords (the daimyō), it was not uncommon for a castle to also have an astronomy tower, or a tower which provided a good vantage point for enjoying the natural beauty of the scenery.

Japan has rarely feared invasion or maintained border forts. However, it is not unlikely that various types of guardtowers or watchtowers would have been kept, outside of larger castle compounds, at various times and places throughout Japan's history.