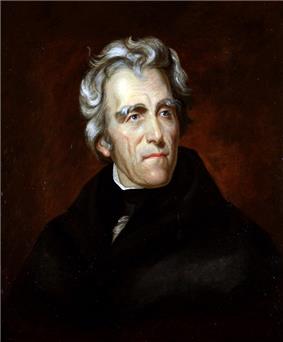 Official White House portrait of Andrew Jackson by Sully.
The Tennessee Democratic Party is the organized coalition of Democrats in Tennessee founded in 1826, tracing its philosophical roots to President Andrew Jackson. Andrew Jackson was born in 1767 in the Carolinas. After fighting in the American Revolutionary War he moved to Tennessee in search of opportunity. When he was in his thirties he was elected major general of the Tennessee militia. After the War of 1812 he became a military hero and a potential candidate for president after having success in his career as a lawyer. Andrew Jackson’s most penetrating political insight was that "concentrated governmental power always leads to corruption and abuse".[1]

About the Party Chair: Roy Herron

Elected as the chairman of the Tennessee Democratic Party in January, 2013, Roy Herron works to advance Democratic priorities and to elect Democratic candidates across the state. First elected to the Tennessee General Assembly in 1986, Herron has been a tireless advocate for Tennessee. Herron served 10 years in the State House and 16 years in the State Senate. Over two decades, Herron earned a reputation as a good listener, forceful advocate and hard worker. He has conducted more than 1,000 listening meetings, and only missed one of more than 1,200 legislative sessions — the day his youngest son was being born. Herron graduated from Dresden High School and the University of Tennessee at Martin. After studying the New Testament and ethics in Scotland as a Rotary Scholar, he received his law and divinity degrees from Vanderbilt University. The former minister is now an attorney and small businessman who practices law in Dresden. Herron’s commitment to public service, his Tennessee values, and his devotion to faith and family are evident in his writing. He is the author of three books: Things Held Dear: Soul Stories for My Sons, Tennessee Political Humor: Some of These Jokes You Voted For (with L.H. “Cotton” Ivy), and God and Politics: How Can a Christian be in Politics? Residing in the county where his family settled in 1819, Roy is married to Nancy and has three sons: John, Rick, and Ben. They are members of First United Methodist Church in Dresden.

The delegation of each state to the Democratic National Committee (DNC) consists of the highest-ranking elected male and female within the state’s Democratic Party. These ranking members for the Tennessee Democratic Party are Chip Forrester and Elisa Parker. As determined by the DNC’s rules Tennessee has been given three additional members. The three additional members are elected, and serve a four-year term by the Tennessee Democratic Executive Committee. The elections are held in accordance with the national party rules. The rules call for elections to be held during the calendar year in which a Democratic National Convention is held. These members of Tennessee’s delegation are expected to represent Tennessee on all matters which come before the committee.[2]

Responsibilities of the National Committee

Current issues for Tennessee Democrats on children and families include that of the high rate of infant mortality in Memphis. The city of Memphis has one of the highest infant mortality rates in the country. During the 111th Congress Congressman Steve Cohen authorized a resolution that passed the House. This resolution urged a stronger national commitment to ending infant mortality. The H.R 3962, the Affordable Health Care for America Act includes legislation called the Newborn Act. This act would create 15 national pilot programs in cities across the nation like Memphis. The act would also provide resources for more research and educational programs aimed at helping women get the pre-natal care they need during pregnancy and during delivery.[3]

Another issue is the reform of foster care for children. Congressman Jim Cooper serves on the board of the Congressional Coalition on Adoption Institute (CCAI) in order to try to improve conditions for foster children.[4]

Last year the Affordable Care Act was voted into existence by Tennessee Democrats. Elements of this new law, which encourages better private-market competition, include a pre-existing condition health insurance plan. Under this plan children with asthma can now get coverage and stay on their parents’ health care plan. Tennessee Democrats have also sponsored the Medicare Information Act. This act makes sure that every taxpayer would receive information on their lifetime of Medicare contributions. The Tennessee Democratic party believes in making health care more affordable and accessible to everyone.[5]

According to the Tennessee Democratic Party the nation’s current energy policies pose economic, national security and environmental threats. It believes that the U.S. is too dependent on foreign oil. Congressman Jim Cooper believes that instead of sending money overseas to countries we are unfriendly with, we should consider other options to help power our country. Other energy and environmental friendly acts Tennessee Democrats have approved of include the Endangered Species Act, the Clean Water Protection Act, and the Clean Air Act.[6] others include: the 10 Million Solar Roofs Act, American Clean Energy and Security Act, American Recovery and Reinvestment Act, the Radioactive Import Deterrence Act, Grand Canyon Water Sheds Protection Act, Nonnative Wildlife Invasion Prevention Act, the Northern Rockies Ecosystem Protection Act, the Safe Markets Development Act, the Retrofit for Energy and Environmental Performance Program Act, and the America’s Red Rock Wilderness Act.[7]

When it comes to national security Tennessee Democrats believe in having a strong national defense and supporting having the resources necessary to keep the nation’s military a strong one. Policies that Tennessee Democrats have approved of in the area of national security include, the Panel on Defense and Acquisition Reform, which has investigated why weapons the Pentagon purchases are always over budget. This work helped to orchestrate the passing of the Weapons Acquisition Reform Act of 2009.[8] Another policy supported by the Tennessee Democrats is the National Urban Search and Rescue System Act. This act will combine the authorization of the National Urban Search and Rescue program and put its authority in one section of the Stafford Act. Doing so would help to make sure that the Urban Search and Rescue can efficiently respond to a wide range of national disasters. The bill will also make sure that Urban Search and Rescue Task Force members are secured with uniform workers compensation and tort liability protection under the Uniformed Services Employment and Reemployment Rights Act.[9]

When it comes to the issue of transportation Tennessee Democrats are investing in things such as the American Recovery and Reinvestment Act. This particular act will put Tennesseans back to work by having the workers rebuild crumbling roads and bridges and will also help to enable a stronger infrastructure for the 21st century economy. Others include the American Coastal Waters and Shorelines Protection Act, which would allow only American vessels to be a part of oil drilling activities in American coastal waters. Also the Critical Infrastructure Earthquake Preparedness Act, this will direct the Administrator of the Federal Emergency Management Agency to create a grant program that will improve the ability of trauma center hospitals and airports to withstand earthquakes.[10]

Since the end of World War II education has been a top priority for Tennessee state government. Education is typically the highest priority of candidates in legislative races. Decisions on education at the state level affect more people, create more emotion, and have greater long term political consequences. Education in Tennessee has the largest segment of the state budget.[11]