Located near the county seat of Belton, Temple lies in the region referred to as Central Texas and is a principal city in the Killeen–Temple–Fort Hood Metropolitan Statistical Area. Located off Interstate 35, Temple is 65 miles (105 km) north of Austin and 34 miles (55 km) south of Waco.

Temple has developed as a small city with a number of arts and retail amenities not typically associated with a smaller community. The primary economic drivers are the extensive medical community (mostly due to Scott & White Memorial Hospital) and goods distribution based on its central location and proximity to larger cities.

In 1882, the Thanksgiving celebration attended by the town's leading men. It was held until 1923.[6]

The Temple Railroad and Heritage Museum, on the second floor of the Santa Fe Railroad station at 315 West Avenue B, commemorates the connection between railroads and the city.[7]

Temple is situated within a relatively short drive of most of the major cities of Texas: 124 mi north to Fort Worth, 130 mi north-northeast to Dallas,[10] 65 mi southwest to Austin, 147 mi southwest to San Antonio, and 168 mi southeast to Houston. The city is located right on Interstate 35 running alongside the Balcones Fault with very mixed geography. Towards the east lies the Blackland Prairie region (a rich farming area), and towards the west the terrain rises with low rolling limestone layered hills at the northeastern tip of the Texas Hill Country.

Over a hundred years ago, the local economy began with the regional Santa Fe Railroad hospital. Temple now thrives in a complex economy, with both goods distribution and its reputation as a regional medical center leading the way. Scott & White is the largest employer in the area with about 12,000 employees.

Temple is home to many regional distribution centers and is headquarters to two large, multi-national companies, Wilsonart International and McLane Company,[13] as well as parent McLane Group. In addition to some manufacturing, there is also a developing customer service / call center industry. Temple is also home to the Temple Bottling Company which produces Dr Pepper (with Imperial Cane sugar).

The Temple Mall serves as one of the city's major shopping destinations, and together with other local shopping centers offers most popular national retailers. The mall has the only Macy's between Austin and Dallas.

Temple is within 30 miles (48 km) of Fort Hood, and military personnel contribute a portion of the city's economy.

Temple College offers two-year associate degrees in a variety of subjects, with strong programs in business administration, information technology and nursing. Temple College was the first college located in Temple, and opened in 1926.[18]

Temple is also home to one of two locations of the Texas A&M Health Science Center College of Medicine. It operates in conjunction with the Scott & White Memorial Hospital and the Olin Teague Veterans' Hospital Center.

The city is served by several dozen radio, television, and newspaper outlets. 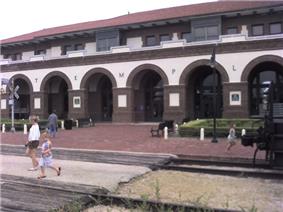 The Hill Country Transit District (The HOP) operates three bus routes within the city, with an additional bus connection to Killeen.

Temple was founded as a railroad junction and serves as a major freight railroad hub to this day. Both the Union Pacific Railroad and BNSF Railway have mainlines serving the city, and a BNSF rail yard and locomotive maintenance facility are located here. Amtrak serves the city with its Texas Eagle passenger train, which stops at the Temple Railway Station.

Temple has general aviation services via Draughon-Miller Central Texas Regional Airport. While current commercial airline service is not currently available in the city, Temple is served by these nearby airports: 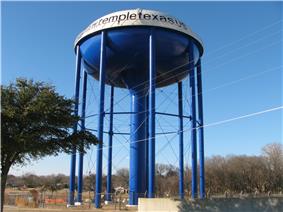 |A water tower advertising the City of Temple's official website[26]

The United States Postal Service operates a regional office in the city.[25]

The Texas Department of Criminal Justice (TDCJ) operates a regional office in the city.[24]

The Texas State Soil and Water Conservation Board has its headquarters in Temple.[23]

Temple is known for its strength as a regional medical center (this is primarily due to the highly respected Scott & White Memorial Hospital). Scott & White is the largest employer in town with about 12,000 employees. With Scott & White, the Veterans' Hospital Center, and other clinics, Temple is home to more physicians per capita than any other community in the nation. Temple is the site of one of two major campuses for the Texas A&M Health Science Center College of Medicine.

, with a population of 420,375, would be within approximately 45 minutes of Dallas, Houston, and San Antonio. Killeen – Temple – Fort Hood metropolitan area If that connection occurred in Temple, the [22]