Southeast Europe or Southeastern Europe is a geographical and political region located primarily in the Balkan peninsula. Sovereign states that are generally included in Southeastern Europe are, in alphabetical order, Albania, Bosnia and Herzegovina, Bulgaria, Croatia, Cyprus, Greece, Kosovo,[1], Moldova, Montenegro, Cyprus, Romania, Serbia, Slovenia and Turkey. These boundaries can vary greatly due to the political, economic, historical, cultural, and geographic considerations of the observer. 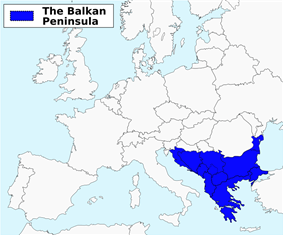 The Balkan Peninsula, as defined by the Danube-Sava-Kupa line

This concept is based on the boundaries of the Balkans peninsula.

The countries that are located fully in the peninsula are the following: Albania, Kosovo, Bosnia and Herzegovina, Bulgaria, Greece, Macedonia, Montenegro and Serbia.[2]

The countries that are located partially in the peninsula are the following: Croatia, Italy, Romania, Slovenia and Turkey.[3] 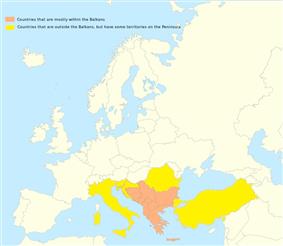 The Stability Pact for South Eastern Europe was an institution aimed at strengthening peace, democracy, human rights and economy in the countries of South Eastern Europe from 1999 to 2008. It was replaced by the Regional Cooperation Council (RCC) in February 2008. The RCC replaced the Stability Pact, which was driven more by outside partners such as the EU, the US, Japan and Turkey, and the countries included were: Albania, Bosnia and Herzegovina, Bulgaria, Croatia, Macedonia, Moldova, Montenegro, Romania, and Serbia.

"The South East Europe (SEE) programme is a unique instrument which, in the framework of the Regional Policy's Territorial Cooperation Objective of the European Union, aims to improve integration and competitiveness in an area which is as complex as it is diverse."[9]

With 235,6 million euro of available funds for the present programming period 2007-2013, "the SEE programme aims to develop transnational partnerships on matters of strategic importance, in order to improve the territorial, economic and social integration process and to contribute to cohesion, stability and competitiveness of the region."[9]

For this purpose, the programme seeks to realize high quality, result oriented projects of strategic character, relevant for the programme area. The SEE Programme is supporting 122 projects[10] developed within four Priority Axes: Innovation, Environment, Accessibility, and Sustainable Growth Areas - in line with the Lisbon and Gothenburg priorities, and is also contributing to the integration process of the non-EU member states.[11]

"The South East Europe Programme helps to promote better integration between the Member States, candidate and potential candidate countries and neighbouring countries. Regional cooperation in South East Europe is essential, regardless of the different stage of integration of the various countries. The stability, prosperity and security of the region are of significant interest to the EU."[12] The participating countries include Albania, Austria, Bosnia and Herzegovina, Bulgaria, Croatia, Greece, Hungary, Macedonia, Republic of Moldova, Montenegro, Romania, Serbia, Slovakia, Slovenia, and some regions of Italy on Adriatic coast and Ukraine.[13][14]