In 2003, he finished second among the league shortstops in batting average (.297), slugging percentage (.415), runs batted in (80), and stolen base percentage (24-to-26). In addition, he was one of four Montreal Expos players to have played all 162 games in a season, and the first to do it twice. Also, his 17 home runs that season were the most ever by a shortstop in Expos history.

Cabrera was traded by Montreal to the Boston Red Sox in the summer of 2004, on the last day of the July trading deadline. Cabrera batted .294 with six home runs and 31 RBIs in 58 games with the Red Sox. He also brought stability to the shortstop position. The trade, which also netted first baseman Doug Mientkiewicz from the Twins, shored up Boston's infield defense and energized the team, which went 42–19 after the deal to win the American League's wild card (56–45 before the trade). "He is a game-changer in the field for me", Curt Schilling said. He hit a home run on his first at-bat with the Red Sox on August 1, becoming the eighth Boston player to accomplish the feat. In Game 2 of the 2004 ALDS, he hit a bases-clearing double, as the Red Sox went on to sweep the 3 game series from the Los Angeles Angels. Boston went on to win its first World Series title since 1918 with a four-game sweep of the St. Louis Cardinals.

Following his 2004 World Series victory with the Red Sox, Cabrera signed as a free agent with the Los Angeles Angels. He replaced fan favorite David Eckstein at shortstop.

In 2007, Cabrera led qualified AL shortstops with a .983 fielding percentage and a league-low 11 errors, earning him the American League Gold Glove for shortstop, the first by an Angel shortstop since Jim Fregosi in 1967. Also, he stole 20 bases for the third straight year and the fifth time overall.

Cabrera had a 63-game on-base streak in early-through-mid-2006, which was among the top five streaks of all time. Ted Williams holds the Major League record with 84 straight games reaching base by a hit, walk, or hit-by-pitch. Cabrera also had a straight steal of home plate on July 2, 2006, the first such time it had happened by an Angels player since 1997. Cabrera scored without a throw. 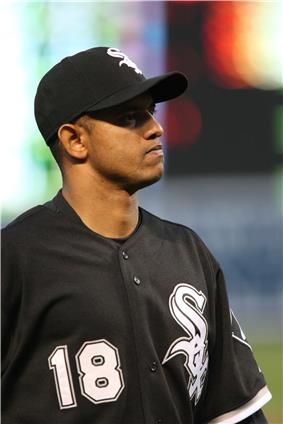 Cabrera with the Chicago White Sox in 2008.

On November 19, 2007, he was traded to the Chicago White Sox along with cash considerations for Jon Garland. Cabrera's one season with White Sox was marred with controversy: arguing with manager Ozzie Guillén, leaving the clubhouse early to avoid the media,[2] calling the press box to have errors overturned,[3] questioning his team's attitude, and kicking dirt at Tampa Bay Rays pitcher Grant Balfour during an at-bat in Game 1 of the AL Divisional Series.[4]

On March 6, 2009, Cabrera signed a one-year deal and played middle infield with the Oakland Athletics.[5][6]

On July 31, 2009, Cabrera was traded to the Minnesota Twins with cash considerations for SS Tyler Ladendorf.

In 2009, Cabrera led all major league players in errors, with 25.[7] He had a solid offensive year, finishing the season batting .284, with 186 hits (4th among all shortstops), and 77 RBIs (1st among AL shortstops and 4th out of all shortstops).[8] His seventh-inning, two-run home run in the American League Central Division's tiebreaker game on October 6, 2009, kept the Twins in the game, which they later won, 6–5, in the 12th inning, to advance to post-season play.[9] 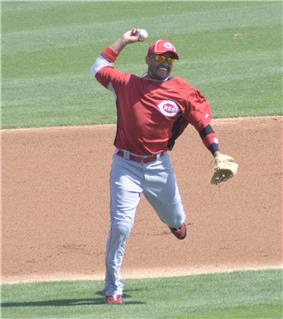 Cabrera with the Cincinnati Reds in 2010.

On February 1, 2010, Cabrera signed a 1-year contract with the Cincinnati Reds.[10] Cabrera spent the season as the Reds shortstop and posted a .263 average with four home runs, 42 RBIs, and a .303 on-base percentage. Cabrera played in only 123 games due to a strained oblique muscle that kept him on the DL from August 3 to September 3.[11] The injury continued to bother him in September and into the playoffs, culminating with Dusty Baker giving him the start in game three of the NLDS despite Cabrera mentioning pain. In the first inning Cabrera made a high throw to first that allowed a run to score. While on the disabled list, Cabrera spent one game in full batboy uniform, bringing balls to the umpire and collecting bats.

The Reds declined the option for 2011 on his contract with a $1 million buyout. Reds GM Walt Jocketty expressed that he wanted to bring back Cabrera at a price lower than the $4 million option.[11]

On February 10, 2011, Cabrera signed a one-year contract for $1 million with the Cleveland Indians.[12] With Asdrúbal Cabrera in place at shortstop, Cabrera switched to playing second base. On June 12, 2011, Cabrera got his 2,000th hit in Yankee Stadium off of pitcher Freddy García.

On July 30, 2011, Cabrera was traded to the San Francisco Giants for minor league outfielder Thomas Neal. He was originally given the number 6, but opted to wear number 43, out of respect for J.T. Snow.

On January 18, 2012, Cabrera announced his retirement on a radio show in his native home country of Colombia.[16] In November of the same year, his brother Jolbert said Orlando could come out of retirement and play for the Colombia national baseball team if they advance to the final round of the 2013 World Baseball Classic.[17]

Cabrera became a naturalized U.S. citizen on May 19, 2011, in South Carolina.