Nikolay Nikolayevich Semyonov, ForMemRS[1] (Russian: Никола́й Никола́евич Семёнов; April 15 [O.S. April 3] 1896 – September 25, 1986) was a Russian/Soviet physicist and chemist. Semyonov was awarded the 1956 Nobel Prize in Chemistry for his work on the mechanism of chemical transformation.

Semyonov was born in Saratov, the son of Elena Dmitrieva and Nikolai Alex Semyonov.[2] He graduated from the department of physics of Petrograd University (1913–1917), where he was a student of Abram Fyodorovich Ioffe. In 1918, he moved to Samara, where he was enlisted into Kolchak's White Army during Russian Civil War.

In 1920, he returned to Petrograd and took charge of the electron phenomena laboratory of the Petrograd Physico-Technical Institute. He also became the vice-director of the institute. In 1921, he married philologist Maria Boreishe-Liverovsky (student of Zhirmunsky). She died two years later. In 1923, Nikolay married Maria's niece Natalia Nikolayevna Burtseva. She brought Nikolay a son (Yuri) and a daughter (Lyudmila).

During that difficult time, Semyonov, together with Pyotr Kapitsa, discovered a way to measure the magnetic field of an atomic nucleus (1922). Later the experimental setup was improved by Otto Stern and Walther Gerlach and became known as Stern–Gerlach experiment.

In 1925, Semyonov, together with Yakov Frenkel, studied kinetics of condensation and adsorption of vapors. In 1927, he studied ionisation in gases and published an important book, Chemistry of the Electron. In 1928, he, together with Vladimir Fock, created a theory of thermal disruptive discharge of dielectrics. 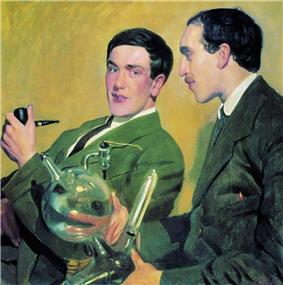 Semyonov's outstanding work on the mechanism of chemical transformation includes an exhaustive analysis of the application of the chain theory to varied reactions (1934–1954) and, more significantly, to combustion processes. He proposed a theory of degenerate branching, which led to a better understanding of the phenomena associated with the induction periods of oxidation processes.

Semyonov wrote two important books outlining his work. Chemical Kinetics and Chain Reactions was published in 1934, with an English edition in 1935. It was the first book in the U.S.S.R. to develop a detailed theory of unbranched and branched chain reactions in chemistry. Some Problems of Chemical Kinetics and Reactivity, first published in 1954, was revised in 1958; there are also English, American, German, and Chinese editions. In 1956, he was awarded the Nobel Prize in Chemistry (together with Sir Cyril Norman Hinshelwood) for this work.

Media related to at Wikimedia Commons