Ireland–United States relations refers to the current and historical bilateral relationship between Ireland and the United States.

According to the government of the United States, U.S. relations with Ireland have long been based on common ancestral ties and shared values.[1] Besides regular dialogue on political and economic issues, the U.S. and Irish governments have official exchanges in areas such as medical research and education. Ireland pursues a policy of neutrality through non-alignment and is consequently not a member of NATO,[2] although it does participate in Partnership for Peace. However, on many occasions Ireland has provided tacit support to the United States and its allies.

According to the 2012 U.S. Global Leadership Report, 67% of Irish people approve of U.S. leadership, the fourth-highest rating for any surveyed country in Europe.[3] This report is over two years out of date though.

In 1800 under the Acts of Union 1800, Ireland was politically unified with Britain to form the United Kingdom of Great Britain and Ireland. All major diplomatic decisions regarding Ireland were made in London. From this time until 1922, when twenty-six of thirty-two counties of Ireland seceded to form the Irish Free State (later becoming the Republic of Ireland), the United States' formal diplomatic affairs with Ireland were carried out through London.

The Irish exerted their own influence inside the United States, particularly through Democratic Party politics. From 1820 to 1860, 2 million Irish arrived in the United States, 75% of these after the Great Irish Famine (or The Great Hunger, Irish: An Gorta Mór) of 1845–1852, struck.[4] Most of them joined fast-growing Irish shantytowns in American cities. The famine hurt Irish men and women alike, especially those poorest or without land.[5] It altered the family structures of Ireland because fewer people could afford to marry and raise children, causing many to adopt a single lifestyle. Consequently, many Irish citizens were less bound to family obligations and could more easily migrate to the United States in the following decade.[6]

After the American Civil War, authorities in the U.S. who were resentful of Britain's role in the war looked the other way as Irish "Fenians" plotted and even attempted an invasion of Canada.[7] The Fenians proved a failure but Irish American politicians, a growing power in the Democratic Party demanded more independence for Ireland and made anti-British rhetoric—called "twisting the lion's tail"—a staple of election campaign appeals to the Irish vote.[8]

De Valera went on to be named

Media related to at Wikimedia Commons

This article incorporates public domain material from websites or documents of the United States Department of State (Background Notes).[1]

The Embassy of the United States is in Dublin.

Embassy of the United States of America (Chancery) in Dublin, Ireland

There is some sentiment in Ireland that the growing consumerism during the boom years eroded the country's culture, with the adoption of American capitalist ideals. Writers such as William Wall, Mike McCormick, and Gerry Murphy have satirized these developments.

Emigration, long a vital element in the U.S.–Irish relationship, declined significantly with Ireland's economic boom in the 1990s. For the first time in its modern history, Ireland experienced high levels of inward migration, a phenomenon with political, economic, and social consequences. However, Irish citizens do continue the common practice of taking temporary residence overseas for work or study, mainly in the US, UK, Australia and elsewhere in Europe, before returning to establish careers in Ireland. The US J-1 visa program, for example, remains a popular means for Irish youths to work temporarily in the United States.[42]

A number of the presidents of the United States have Irish origins.[39] The extent of Irish heritage varies. For example, Ronald Reagan's father was of Irish ancestry,[40] while his mother also had some Irish ancestors. John F. Kennedy had Irish lineage on both sides. Within this group, only Kennedy was raised as a practicing Roman Catholic. Current President Barack Obama's Irish heritage originates from his Kansas-born mother, Ann Dunham, whose ancestry is Irish and English.[41] His Vice President Joe Biden is also an Irish-American.

Irish immigration to the USA has played a large role in the culture of the United States. About 33.3 million Americans—10.5% of the total population—reported Irish ancestry in the 2013 American Community Survey conducted by the U.S. Census Bureau.[38] Irish Americans have made many contributions to American culture and sport. Halloween is thought to have evolved from the ancient Celtic/Gaelic festival of Samhain, which was introduced in the American colonies by Irish settlers.

The major U.S. investments in Ireland to date have included multibillion-dollar investments by Intel, Dell, Apple Inc, Microsoft, IBM, Wyeth, Quintiles, Google, EMC and Abbott Laboratories. Currently, there are more than 600 U.S. subsidiaries operating in Ireland, employing in excess of 100,000 people and spanning activities from manufacturing of high-tech electronics, computer products, medical supplies, and pharmaceuticals to retailing, banking and finance, and other services. Many U.S. businesses find Ireland an attractive location to manufacture for the EU market, since as a member of the EU it has tariff free access to the European Common Market. Government policies are generally formulated to facilitate trade and inward direct investment. The availability of an educated, well-trained, English-speaking work force and relatively moderate wage costs have been important factors. Ireland offers good long-term growth prospects for U.S. companies under an innovative financial incentive programme, including capital grants and favourable tax treatment, such as a low corporation income tax rate for manufacturing firms and certain financial services firms. Irish firms are now beginning to provide a lot of employment in the U.S., for example indigenous Irish companies, particularly in the high tech sector have provided in excess of 80,000 jobs to date for American citizens.

The United States is Ireland's largest export partner and second-largest import partner (after the United Kingdom), accounting for 23.2% of exports and 14.1% of imports in 2010.[36] It is also Ireland's largest trading partner outside of the European Union. In 2010, trade between Ireland and the United States was worth around $36.25 billion. U.S. exports to Ireland were valued at $7.85 billion while Irish exports to the U.S. were worth some $28.4 billion, with Ireland having a trade surplus of $20.5 billion over the U.S.[37] The range of U.S. products imported to Ireland includes electrical components, computers and peripherals, pharmaceuticals, electrical equipment, and livestock feed. Exports to the United States include alcoholic beverages, chemicals and related products, electronic data processing equipment, electrical machinery, textiles and clothing, and glassware.

Subsidiaries of US multinationals have located in Ireland due to low taxation. Ireland is the world's most profitable country for US corporations, according to analysis by US tax journal Tax Notes.[34] In 2013, Ireland was named the "best country for business" by Forbes.[35] 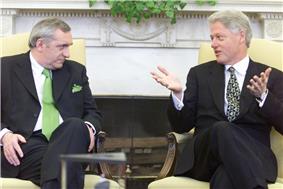 Ireland's air facilities were used by the United States military for the delivery of military personnel involved in the 2003 invasion of Iraq through Shannon Airport. The airport had previously been used for the invasion of Afghanistan in 2001, as well as the First Gulf War.[28] The government of Republic of Ireland has come under internal and external pressure to inspect airplanes at Shannon Airport to investigate whether or not they contain extraordinary rendition captives.[29][30] Police at Shannon said that they had received political instruction not to approach, search or otherwise interfere with US aircraft suspected of being involved in extraordinary rendition flights. Irish Justice Minister Dermot Ahern sought permission from the US for random inspection of US flights, to provide political "cover" to him in case rendition flights were revealed to have used Shannon; he believed at least three flights had done so.[31] Ireland has been censured by the European Parliament for its role in facilitating extraordinary rendition and taking insufficient or no measures to uphold its obligations under the UN CAT.[32]

Good Friday Agreement on 10 April 1998 stating, "I am pleased to announce that the two governments and the political parties in Northern Ireland have reached agreement," and it emerged later that President Clinton had made a number of telephone calls to party leaders to encourage them to reach this agreement.

U.S. foreign direct investment in Ireland has been particularly important to the growth and modernization of Irish industry since 1980, providing new technology, export capabilities, and employment opportunities. During the 1990s, Ireland experienced a period of rapid economic growth referred to as the Celtic Tiger. While Ireland's historical economic ties to the UK had often been the subject of criticism, Peader Kirby argued that the new ties to the US economy were met with a "satisfied silence".[19] Nevertheless, voices on the political left have decried the "closer to Boston than Berlin" philosophy of the Fianna Fail-Progressive Democrat government.[20] Growing wealth was blamed for rising crime levels among youths, particularly alcohol-related violence resulting from increased spending power. However, it was also accompanied by rapidly increased life expectancy and very high quality of life ratings; the country ranked first in The Economist's 2005 quality of life index.[21]

Ireland was officially neutral during World War II, but declared an official state of emergency on 2 September 1939 and the Army was mobilised. As the Emergency progressed, more and newer equipment was purchased for the rapidly expanding force from Britain and the United States as well as some manufactured at home. For the duration of the Emergency, Ireland, while formally neutral, tacitly supported the Allies in several ways.[16] German military personnel were interned in the Curragh along with the belligerent powers' servicemen, whereas Allied airmen and sailors who crashed in Ireland were very often repatriated, usually by secretly moving them across the border to Northern Ireland.[16] G2, the Army's intelligence section, played a vital role in the detection and arrest of German spies, such as Hermann Görtz. During the Cold War, Irish military policy, while ostensibly neutral, was biased towards NATO.[17] During the Cuban Missile Crisis, Seán Lemass authorised the search of Cuban and Czechoslovak aircraft passing through Shannon and passed the information to the CIA.[18]

, who resented the dominant position he established, preferring to retain their control over Irish affairs in the United States. Daniel F. Cohalan and Judge John Devoy leaders, such as Irish-American Recognition was not forthcoming in the international sphere. He also had difficulties with various [14] In 1921 it was said that $1,466,000 had already been spent, and it is unclear when the net balance arrived in Ireland.[13] Of this, $500,000 was devoted to the American presidential campaign in 1920 which helped him gain wider public support there.[12] De Valera managed to raise $5,500,000 from American supporters, an amount that far exceeded the hopes of the Dáil.[11]