Article 9 of Indian Constitution says that a person who voluntarily acquires citizenship of any other country is no longer an Indian citizen. Also, according to The Passports Act, a person has to surrender his Indian passport; it is a punishable offense under the act if he fails to surrender the passport.

Until its Independence in 1947, India was a part of the British Empire. However, between 1 January 1949 and 25 January 1950, Indians were British subjects, by virtue of Section 18(3) of Indian Independence Act, unless they had already acquired citizenship of United Kingdom or any other country.

On 20 December 1961, India acquired the territories of Goa, Daman and Diu and Dadra and Nagar Haveli after the military action which were under the territories of Portugal. The French territory of Puducherry, Karaikal, Mahe and the Free town of Chandranagore, were acquired under treaty of cession with France. Sikkim was also merged with India and became a constituent state with effect from 16 May 1975. Some of the enclaves in the eastern part of India, were also acquired under border agreements with Pakistan and Bangladesh respectively[1]

In order to expressly provide the citizenship for people in territories as mentioned above, the central government issued the Goa, Daman and Diu (Citizenship) Order, 1962, Dadra and Nagar Haveli (Citizenship) Order, 1962 and Citizenship (Pondicherry) Order 1962, in exercise of its powers under section 7 of the Citizenship act and for Sikkim, the President extended the Citizenship act, and the relevant rules under Article 371-F(n) of Indian Constitution. In case of acquired enclaves, that did not necessitate legislative action, as that was only a border demarcation agreement.[1]

Citizenship at the commencement of the constitution of India

Persons domiciled in the territory of India as on 26 November 1949 automatically became Indian citizens by virtue of operation of the relevant provisions of the Indian Constitution coming into force, and most of these constitutional provisions came into force on 26 January 1950. The Constitution of India also made provision regarding citizenship for migrants from the territories of Pakistan which had been part of India before partition.

Persons born outside India on or after 26 January 1950 but before 10 December 1992 are citizens of India by descent if their father was a citizen of India at the time of their birth.

Persons born outside India on or after 10 December 1992 are considered citizens of India if either of their parents is a citizen of India at the time of their birth.

From 3 December 2004 onwards, persons born outside of India shall not be considered citizens of India unless their birth is registered at an Indian consulate within one year of the date of birth. In certain circumstances it is possible to register after 1 year with the permission of the Central Government. The application for registration of the birth of a minor child must be made to an Indian consulate and must be accompanied by an undertaking in writing from the parents of such minor child that he or she does not hold the passport of another country.

The Central Government may, on an application, register as a citizen of India under section 5 of the Citizenship Act 1955 any person (not being an illegal migrant) if he belongs to any of the following categories:

Citizenship of India by naturalization can be acquired by a foreigner (not illegal migrant) who is ordinarily resident in India for twelve years (throughout the period of twelve months immediately preceding the date of application and for eleven years in the aggregate in the fourteen years preceding the twelve months) and other qualifications as specified in Third Schedule to the Citizen Act.

Renunciation and termination of Indian citizenship 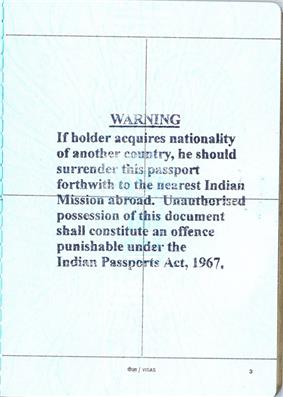 The acquisition of another country's passport is also deemed under the Citizenship Rules, 1956 to be voluntary acquisition of another country’s nationality. Rule 3 of Schedule III of the Citizenship Rules, 1956 states that "the fact that a citizen of India has obtained on any date a passport from the Government of any other country shall be conclusive proof of his having voluntarily acquired the citizenship of that country before that date". Again, this rule applies even if the foreign passport was obtained for the child by his or her parents, and even if possession of such a passport is required by the laws of a foreign country which considers the child to be one of its citizens (e.g., a U.S.-born child of Indian parents who is automatically deemed to be a U.S. citizen according to U.S. law, and who is therefore required by U.S. law to have a U.S. passport in order to travel abroad). It does not matter that a person continues to hold an Indian passport. This rule seemingly even applies if the foreign nationality was automatically had from birth, and thus not voluntarily acquired after birth. Persons who acquire another citizenship lose Indian citizenship from the date on which they acquire that citizenship or another country's passport. The prevailing practice at a number of British diplomatic posts, for example, is to impound and return to the Indian authorities the Indian passports of those applicants who apply for and are granted British passports.[3]

Special rules exist for Indian citizens with a connection to Goa, Daman and Diu. Rule 3A of Schedule III of the Citizenship Rules, 1956 states that "Where a person, who has become an Indian Citizen by virtue of the Goa, Daman and Diu (Citizenship) Order, 1962, or the Dadra and Nagar Haveli (Citizenship) Order 1962, issued under section 7 of the Citizenship Act, 1955 (57 of 1955) holds a passport issued by the Government of any other country, the fact that he has not surrendered the said passport on or before the 19 January 1963 shall be conclusive proof of his having voluntarily acquired the citizenship of that country before that date. 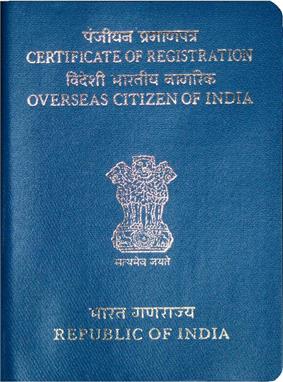 Front Cover of an OCI Registration Certificate. Note: It may look like but it is not a passport nor does it confer actual Dual citizenship.

In response to persistent demands for dual citizenship, particularly from the diaspora in North America and other developed countries, the Overseas Citizenship of India (OCI) scheme was introduced by amending The Citizenship Act, 1955 in August 2005. The scheme was launched during the Pravasi Bharatiya Divas convention at Hyderabad in 2006.[4] Indian authorities have interpreted the law to mean a person cannot have a second country's passport simultaneously with an Indian one — even in the case of a child who is claimed by another country as a citizen of that country, and who may be required by the laws of the other country to use one of its passports for foreign travel (such as a child born in the United States or in Australia to Indian parents), and the Indian courts have given the executive branch wide discretion over this matter. Therefore, Overseas Citizenship of India is not an actual citizenship of India[5] and thus, does not amount to dual citizenship or dual nationality. Moreover, the OCI card is not a substitute for an Indian visa and therefore, the passport which displays the lifetime visa must be carried by OCI holders while traveling to India.[6]

The Central Indian Government, on application, may register any person as an Overseas Citizen of India if the person:-

An Overseas Citizen of India will enjoy all rights and privileges available to Non-Resident Indians on a parity basis excluding the right to invest in agriculture and plantation properties or hold public office.[8] It is very important that the person carry his existing foreign passport which should include the new visa called ‘U’ visa which is a multi-purpose, multiple-entry, lifelong visa. It will entitle the Overseas Citizen of India to visit the country at any time for any length of time and for any purpose. Any changes to the foreign passport, should be conveyed to the Indian Embassy, so that everything will be consistent.

Overseas citizens of India will not enjoy the following rights even if resident in India: (i) the right to vote, (ii) the right to hold the offices of President, Vice-President, Judge of Supreme Court and High Court, Member of Lok Sabha, Rajya Sabha, Legislative Assembly or Council, (iii) appointment to Public Services (Government Service). Also, Overseas Citizens of India are not eligible for an Inner Line Permit, and they have to apply for a protected area permit if they want to visit certain areas in India.

Though not actual dual citizenship, the privileges afforded by acquiring an OCI card is that now multinational companies are finding it simpler to hire the OCI cardholders, who enjoy a multiple entry, multipurpose lifelong visa to visit India. The card provides a lifelong visa to the holder, sparing them the need to obtain separate work permits. OCI holders are treated on par with NRIs for economic, financial and educational matters and only don’t have political rights and rights to buy agricultural and plantation properties or hold public office.[9]

They are also exempt from registration with the Foreigners Regional Registration Officer (FRRO) on their arrival in the country and can stay or live for as long as they wish. OCI cardholders can travel at very short notice and take up assignments in India, while others could get caught up in bureaucratic delays over their employment visa. Many companies are following an active policy of moving PIOs to India for business expansion. Indian missions overseas are witnessing a deluge in OCI applications, the number of OCI cards issued by consulates around the world have been steadily rising with several Indian consulates grappling with a huge backlog of applications.[11] 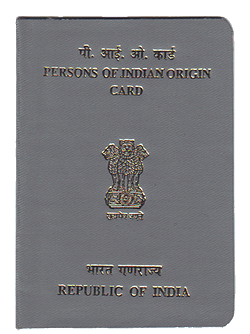 Front cover of a PIO card

This is issued to any person currently holding foreign passport, who can prove their Indian origin up to three generations before. The same holds for spouses of Indian citizen or persons of Indian origin. Citizens of Pakistan, Bangladesh, and other countries as may be specified by the central government are not eligible for grant of Persons of Indian Origin card.[14] The PIO card must be produced alongside the foreign passport when entering or departing any port in India. Any changes in the foreign passport - name changes or passport renewal - must also be reflected in the PIO card.

A PIO card is generally valid for a period of fifteen years from the date of issue. It gives the holder the following benefits:

Possession of a PIO card will not entitle the holder to:

In early 2011, the then Prime Minister of India, Manmohan Singh, announced that the Person of Indian Origin card will be merged with the Overseas Citizen of India card.[15] This new card is proposed to be called the Overseas Indian Card.[16]