Ernest "Ernie" Davis (December 14, 1939 – May 18, 1963) was an American football halfback and the first African-American athlete to win the Heisman Trophy. Wearing number 44, Davis played college football for Syracuse University before being drafted by the Washington Redskins of the National Football League (NFL), then almost immediately traded to the Cleveland Browns in December 1961, when he was issued number 45. However, he never played a professional game, as he was diagnosed with leukemia in 1962 and died at the age of 23 years. Davis was inducted into the College Football Hall of Fame in 1979. He is the subject of the 2008 Universal Pictures film The Express, based on the non-fiction book Ernie Davis: The Elmira Express, by Robert C. Gallagher.

Davis was born on December 14, 1939 in New Salem, Pennsylvania. From 14 months of age, Ernie was cared for by his maternal grandparents, Willie and Elizabeth Davis, in Uniontown, Pennsylvania. His father was killed in an accident shortly after Ernie’s birth, and his mother, Avis Marie Davis Fleming, could not raise him alone.[1] At the age of 12, he went to live with his mother and stepfather in Elmira, New York. In Elmira, Davis excelled in baseball, football and basketball in grade school. He attended Elmira Free Academy, where he earned two All-American honors. At the end of his senior season he was recruited by numerous colleges, and chose to attend Syracuse University after being persuaded by his childhood hero, Jim Brown, a Syracuse alumnus.[2] 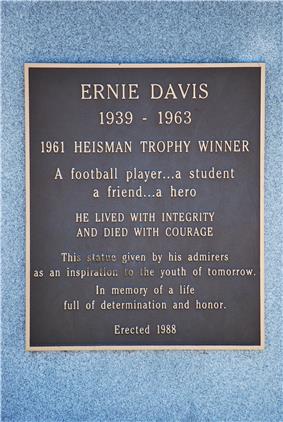 Davis played football for coach Ben Schwartzwalder at Syracuse University from 1959 to 1961, and went on to national fame in each of those three seasons, twice winning first-team All-American honors. As a sophomore, Davis led the 1959 Syracuse team to a national championship, capping an 11–0 season with a 23–14 win over the Texas Longhorns in the 1960 Cotton Bowl Classic, where Davis was named Most Valuable Player. That same season, Elmira Star-Gazette sports writer Al Mallette coined the nickname for Davis, the "Elmira Express". In his junior year, 1960, he set a record of 7.8 yards per carry and was the third leading rusher in the country with 877 yards, having rushed for 100 yards in six of nine games. The 1960 Syracuse Orangemen finished with a record of 7–2 and did not play in a post-season bowl game. In Ernie's senior year, the 1961 Orangemen finished with a record of 8–3, closing the season with a 15–14 victory over the Miami Hurricanes in the Liberty Bowl, played at Philadelphia's Franklin Field. College football used limited substitution rules at the time and players played both offense and defense.

Davis found discrimination prevalent in the American South during his Cotton Bowl visit to host city Dallas, Texas. Author Jocelyn Selim writes that at the banquet following the 1960 game, Davis was told he could only accept his award and then would be required to leave the segregated facility. Davis and his black teammates were allowed to finish their meals at the banquet. When dessert was brought, a gentleman quietly approached them and told them they would have to leave when the doors were opened to the public for a dance. The three got up to leave and when the teammates found out, they wanted to leave too, but were told that it would only cause a bigger problem, so they stayed.

A different account of the banquet is given by John Brown. He was Davis' teammate at Syracuse and on the Cleveland Browns, his roommate and a close friend. According to an article in the Houston Chronicle, all the players from the game attended the banquet. Brown recalls that the teams sat on opposite sides of the room. After everyone ate and the trophies were handed out, the three black Syracuse players, including Brown and Davis were asked to leave and were taken to another party in Dallas by local NAACP representatives. One Syracuse player, Gerhard Schwedes, recommended that the whole Syracuse team leave the banquet to show solidarity with their black teammates, but the suggestion was overruled by Syracuse officials. When the Chronicle asked Brown whether the film is a truthful portrayal of his friend, Brown said " ... in short, no."[3]

Davis became the first black athlete to be awarded the Heisman Trophy (the highest individual honor in collegiate football) and he also won the Walter Camp Memorial Trophy[4] following his 1961 senior-year season at Syracuse University. President John F. Kennedy had followed Davis' career and requested to meet him while he was in New York to receive the trophy.[5] Later in 1963, when Elmira chose February 3 to celebrate Davis' achievements, Kennedy sent a telegram, reading:

During his time at Syracuse, Davis wore the same number, 44, as legendary Orangeman Jim Brown, helping to establish a tradition at the school that was acknowledged on November 12, 2005, when the school retired the number in an on-field ceremony. After winning the Heisman Trophy, Ernie Davis talked Floyd Little into doing an about face and play football for Syracuse instead of Notre Dame. Davis also played basketball at Syracuse for one season 1960-1961. Syracuse University, as a way to honor all of the athletes that have worn the number 44, was granted permission by the United States Postal Service to change its zip code to 13244.

While attending Syracuse, Davis was a member of the

A motion picture biography, The Express, directed by Gary Fleder and based on the non-fiction book The Elmira Express: the Story of Ernie Davis by Robert C. Gallagher, began production in April 2007[14] and was released on October 10, 2008. Rob Brown plays Davis, with Dennis Quaid portraying Davis' Syracuse University coach, Ben Schwartzwalder.

In the summer of 1962, Davis was diagnosed with acute monocytic leukemia and began receiving medical treatment. The disease was incurable and he died in Cleveland Lakeside Hospital May 18, 1963, at the age of 23. Ernie went to Johns Hopkins when he was dying, three months after being diagnosed and through chemical treatments experienced a 4-5 month remission. That was the time that the controversy between Paul Brown and Art Modell took place. Both the House and the Senate of the United States Congress eulogized Davis, and a wake was held at The Neighborhood House in Elmira, New York, where more than 10,000 mourners paid their respects. During the funeral, a message was received from President Kennedy, and was read aloud to all of the people attending the service. Davis is buried at Woodlawn Cemetery in Elmira, New York, the same cemetery in which Mark Twain is buried. His commemorative statue stands in front of Ernie Davis Middle School, which Davis attended as Elmira Free Academy during his high school years. The building was named in his honor after its conversion to a middle school. Another statue of Davis stands on the campus of Syracuse University, near the steps of Hendricks Chapel and the Quad where pre-game pep rallies are held. He was elected to the college football hall of fame in the Fall of 2008, coinciding with the premiere of The Express and the beginning of construction of Ernie Davis Hall, a dorm on the Syracuse campus.

Davis was allowed to practice on the field (without physical contact) and helped Brown draw up game plans, but never played a meaningful down. His only appearance at Cleveland Stadium came during a 1962 pre-season game, in which he ran onto the field as a spotlight followed him. Following his death, the Browns retired his number 45 jersey.[13]

Davis signed a three-year, $200,000 contract with the Browns in late December 1961, again without the knowledge or consent of Modell, while he (Davis) was in San Francisco, California practicing for the East-West Shrine Game.[12] Originally reported at $80,000, the contract, according to Davis' attorney, A. William (Tony) DeFilippo, consisted of $80,000 for playing football, including a $15,000 signing bonus; $60,000 for ancillary rights, such as image marketing; and $60,000 for off-season employment.[12] It was the most lucrative contract for an NFL rookie up to that time.[12] However, the Browns' dream of pairing Davis with Jim Brown in the backfield took a tragic turn when Davis was diagnosed with leukemia during preparations for the 1962 American Football Coaches All-American Game in Buffalo, New York and also at Browns training camp. The rift between Coach Brown and Modell worsened when Modell brought in doctors who said Davis was well enough to play. However, Brown refused to suit him up. Although Davis' leukemia was in remission at the time, Brown felt letting him play would hurt team morale. This contributed to Modell's decision to replace Brown before the 1963 season.

Redskins founder and owner Interior Secretary Stewart Udall issued an ultimatum to Marshall: sign a black player by the start of the 1962 season, or he would revoke the Redskins' 30-year lease on D.C. Stadium (now Robert F. Kennedy Memorial Stadium). The stadium was a city-owned facility, and the Washington city government has long been legally reckoned as a branch of the federal government (given that the Constitution gives Congress ultimate authority over the capital). Marshall could not bring himself to draft a black player, so he left the decision to general manager and head coach Bill McPeak, who picked Davis. Davis refused to play for the Redskins, and demanded a trade.[9] In turn a trade to Cleveland was engineered by Browns coach Paul Brown, without the knowledge and consent of the team's new owner, Art Modell. This had been standard operating procedure with the Browns from their inception in 1946; Brown served as his own general manager, and had enjoyed more or less a free hand in football matters.[10][11] Davis chose to go to the Cleveland Browns where his classmate John Brown would be his roommate and Jim Brown, whom he admired, was already playing.

Davis was the number-one pick in the 1962 NFL Draft. Selected by the Washington Redskins,[7] he was traded to the Cleveland Browns. He was also drafted by the Buffalo Bills of the American Football League.[8]

Davis was posthumously inducted into the College Football Hall of Fame in 1979.