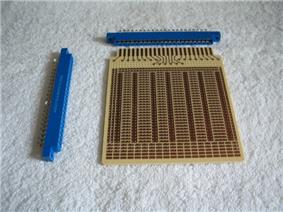 Two 44-pin edge connector sockets (blue objects) and matching circuit board. The Edge connector is 3.5 in (89 mm) long, with 22 contacts on each side

Edge connector sockets consist of a plastic "box" open on one side, with pins on one or both side(s) of the longer edges, sprung to push into the middle of the open center. Connectors are often keyed to ensure the correct polarity, and may contain bumps or notches both for polarity and to ensure that the wrong type of device is not inserted. The socket's width is chosen to fit to the thickness of the connecting PCB.

The opposite side of the socket is often an insulation-piercing connector which is clamped onto a ribbon cable. Alternatively, the other side may be soldered to a motherboard or daughtercard.

Edge connectors are commonly used in personal computers for connecting expansion cards and computer memory to the system bus. Example expansion peripheral technologies which use edge connectors include PCI, PCI Express, and AGP. Slot 1 and Slot A also used edge connectors; the processor being mounted on a card with an edge connector, instead of directly to the motherboard as before and since.

Video game cartridges typically take the form of a PCB with an edge connector: the socket is located within the console itself. The Nintendo Entertainment System was unusual in that it was designed to use a zero insertion force edge connector:[1] instead of the user forcing the cartridge into the socket directly, the cartridge was first placed in a bay and then mechanically lowered into position.