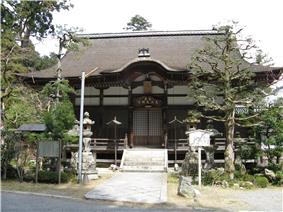 Motoyama-ji's chinjū-dō
The frequent presence, even today, of a Shinto shrine near or within a Buddhist temple has its roots in the efforts made by the Japanese to reconcile local kami worship with imported Buddhism. (For details, see article Shinbutsu shūgō) One of the first such efforts was made during the Nara period (710 - 794) with the founding of so-called shrine-temples (jingū-ji), complexes consisting of a shrine dedicated to some kami and of a Buddhist temple.[8][9] This syncretic solution is believed to have its roots in the Chinese qié-lán-shen (garanjin (伽藍神, lit. kami of the garan) in Japanese), tutelary gods of Chinese temples.[2]

The reason for Buddhist temples and Shinto shrines to be constructed together was the belief that kami, like humans, needed salvation through the power of Buddha.[9] Kami were then thought to be subject to karma and reincarnation like human beings, and early Buddhist stories tell how that the task of helping suffering kami was assumed by wandering monks.[10] A local kami would appear in a dream to the monk, telling him about his suffering.[10] To improve the kami's karma through Buddhist rites and the reading of sūtras, the monk would build a temple next to the kami's shrine.[10] Such groupings were created already in the 7th century, for example in Usa, Kyūshū,[10] where kami Hachiman was worshiped together with Miroku Bosatsu (Maitreya) at Usa Hachiman-gū. As a result of the creation of shrine-temple complexes, many shrines that had until then been just an open-air site became Buddhist style groupings of buildings.[11]

At the end of the same century, Hachiman was declared to be the Dharma's tutelary kami and, a little later, a bosatsu.[8] Shrines for him started to be built at temples (the so-called temple-shrines, or jisha), marking an important step ahead in the process of amalgamation of kami worship and Buddhist cults.[8] When the great Buddha at Tōdai-ji in Nara was built, within the temple grounds was also erected a shrine for Hachiman, according to the legend because of a wish expressed by the kami himself.[10] After this, temples in the entire country adopted tutelary kami like Hachiman and built shrines for them.[8]

This tendency to see kami as tutelary deities was strengthened during the Edo period (1603–1868) by the terauke system. Because all shrines were by law owned and managed by a Buddhist temple, many of their kami came to be viewed as the temple's tutelary kami.[2]

As a result, until the Meiji period (1868–1912) the vast majority of all shrines were small, had no permanent priest and belonged to a Buddhist temple.[12] With very few exceptions like Ise Shrine and Izumo Taisha, they were just part of a temple-shrine complex controlled by Buddhist clergy.[12] Because they enshrined a local and minor tutelary kami, they were called with the name of the kami followed by terms like gongen (avatar), ubusuna, or myōjin (明神, great kami). The term jinja (神社), now the most common, was rare.[12] Examples of this kind of pre-Meiji use are Tokusō Daigongen and Kanda Myōjin.