Dhu Nuwas, the Jewish Himyarite ruler of Yemen, in the period c. 523-525[5] or c. 518-20[1] launched military operations against the Aksumites Christians and their local Arab Christian allies.[6] The Aksumites in Zafar were killed, their fortresses in the Yemeni highlands destroyed, and Najran sacked.

Najran fell in 518 or 523 and many members of the Himyarite Christian community were put to death evoking great sympathy throughout the Christian regions of the Orient and prompting an Aksumite military intervention aided by a Byzantine fleet first made in 518/523.[6]

Abraha was either one of the commanders or a member of one of the armies led by King Kaleb of Axum against Dhu Nuwas. In al-Tabari's history, 'Abraha is said to have been the commander of the second army sent by Kaléb after the first failed, led by 'Ariat.

Abraha was reported to have led his army of 100,000 men with hundreds of elephants to successfully crush all resistance of the Yemeni army and then, following the suicide of Dhu Nuwas, seized power and established himself at Sana‘a. He aroused the wrath of Kaléb, however, by withholding tribute who then sent his general 'Ariat to take over the governorship of Yemen. 'Abraha rid himself of the latter by a subterfuge in a duel resulting in 'Ariat being killed and 'Abraha suffering the injury which earned him the sobriquet of al-Asräm, "scar-face."[5]

According to Procopius (Histories 1.20), 'Abraha seized the control of Yemen from Esimiphaeus (Sumuafa' Ashawa'), the Christian Himyarite viceroy appointed by Kaléb, with the support of dissident elements within the Aksum occupation force who were eager to settle in the Yemen, then a rich and fertile land.[5] Stuart Munro-Hay, who proposes a 518 date for the rise of Dhu Nuwas, dates this event to 525,[2] while by the later chronology (in which Dhu Nuwas comes to power in 523), this event would have happened about 530, although a date as late as 543 has been postulated by Jacques Ryckmans.[5]

An army sent by Kaléb to subdue 'Abraha joined his ranks and killed the ruler sent to replace him (this is perhaps a reference to 'Ariat) and a second army was defeated. After this Kaléb had to accord him de facto recognition before earning recognition under Kaleb's successor for a nominal tribute. 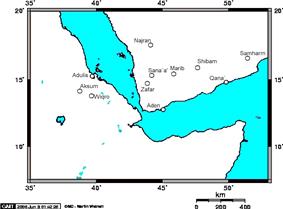 A reference map of the empire of Kaleb of Axum.

Abraha is seen as then becoming a prominent figure in Yemen's history, promoting the cause of Christianity in the face of the prevalent Judaism and the paganism of Central Arabia.[5] A zealous Christian himself, he is said to have built a great church at San'a' and to have repaired the principal irrigation dam at the Sabaean capital of Ma'rib.

Epigraphic sources chronicling 'Abraha's career include an inscription on the Marib Dam recording the quelling of an insurrection backed by a son of the deposed ruler, Esimiphaeus, in the year 657 of the Sabaean era, i.e. between 540-550; vital repairs effected to the dam later in the same year; the reception of envoys from the Negus, from Byzantium, from Persia and from Al-Harith ibn Jabalah, the phylarch of Arabia; and the completion of repairs to the dam in the following year, followed by a great feast of rejoicing.

The royal title adopted by 'Abraha "King of Saba' and dhü-Raydän and Hadhramaut and Yamanat and of their Arabs on the plateau and the lowland." was of the Himyarites[7]

Islamic tradition credits Abraha with a military expedition against the Quraysh of Mecca in an invasion of Hejaz in 570,[6] known as the Year of the Elephant. The tafsir (exegesis) of the surat al-Fil states that he perished.

The traditions also say that Abraha is said to have built a cathedral at San'a' known as "al-Qullays" (from the Greek Ekklesia)[8] to rival the Kaaba at Mecca and specifically came with his forces of elephants to destroy the Kaaba.[9]

No reliable information exists about the date of 'Abraha's death. Munro-Hay dates his death to some time after 553 based on the inscription at Murayghän.[1] Islamic tradition places it immediately after his expedition to Mecca. He was succeeded on the throne by two of his sons, Yaksum and Masruq, born to him by Raihäna, a Yemenite noblewoman whom 'Abraha had abducted from her husband.[5]

Between 570 and 575 the pro-Persian group in Yemen made contact with the Sassanid king through the Lakhmid princes in Al-Hirah. The Persians then sent troops under the command of Wahriz, who helped the semi-legendary Sayf ibn Dhi Yazan drive the Aksumites from Yemen and Southern Arabia became a Persian dominion under a Yemenite vassal within the sphere of influence of the Sassanian empire.[6]

Death of Abraha according to Islamic belief

According to the Qur'an,[10] the next day, as Abraha prepared to enter the Mecca, a dark cloud of small birds appeared. The birds, sent by Allah, carried small rocks in their beaks, and bombarded Abraha's army, who fled in panic. Abraha was seriously wounded and he retreated towards Yemen but died on the way.

This is the theme mentioned in the holy Qur'an, Chapter 105 "al-Feel" (The Elephant) as follows:

"Have you not seen how your Lord dealt with the possessors of the elephant? Did He not cause their war plot to end in confusion, and send down (to prey) upon them birds in flocks, casting stones of baked clay, so He rendered them like straw eaten up"