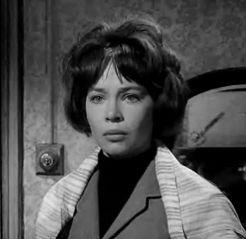 Leslie Caron in the film

The L-Shaped Room is a 1962 British drama film, directed by Bryan Forbes, which tells the story of a young French woman, unmarried and pregnant, who moves into a London boarding house, befriending a young man in the building. It stars Leslie Caron and Tom Bell.

The movie was adapted by Bryan Forbes from the novel by Lynne Reid Banks.

Leslie Caron's performance won her the Golden Globe Award and BAFTA Award for best actress, and also earned her a nomination for the Academy Award for Best Actress.

A 27-year-old French woman, Jane Fosset (Caron), arrives alone at a rundown boarding house in Notting Hill, London, moving into an L-shaped room. Beautiful but withdrawn, she encounters the residents of her house, each a social outsider in his or her own way.

Jane is pregnant and has no desire to marry the father. On her first visit to a doctor, she wants to find out if she really is pregnant and consider her options. The doctor's facile assumption that she must want either marriage or an abortion insults her to the extent that Jane determines to have the child.

She and Toby (Bell) start a romance, which is disrupted when he learns that she is pregnant by a previous suitor. They try to work things out, but he is also unhappy with his lack of income and success as a writer.

Jane befriends the other residents and they help her when she goes into labour. Toby visits her in the hospital and gives her a copy of his new book, called The L-Shaped Room. After leaving the hospital, Jane journeys home to her parents in France, saying goodbye to the room where she had lived for seven months.

The Smiths chose to open their 1986 album, The Queen Is Dead, with a sound sample from this film – taken from the scene at the house in London during the Christmas season, in which Mavis leads her fellow Brits through an off-key chorus of "Take Me Back to Dear Old Blighty".

Peter Katin's recording of Johannes Brahms's Piano Concerto No. 1 in D minor, Op. 15 is used as the background music, and excerpts occur frequently throughout the film.[2] The original film score was composed by John Barry.

Morrissey, The Stone Roses, The Pretenders, Alternative rock, The Beatles