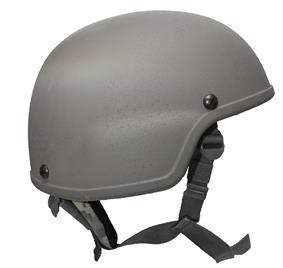 The helmet has been shown nearly impenetrable to fragments fired by test guns. In a v50 test, guns were unable to attain the velocity required to get 50% of the fragments through a helmet. The helmet has vastly exceeded the 35% ballistic improvement requirement.[4]

The helmet's design allows for the addition of devices such as communications and night-vision equipment.

ECH development began in 2007. Solicitations were accepted in late April until early June 2009. In July, more than $8 million was awarded to four vendors for five helmet designs in July 2009. Mine Safety Appliances was awarded $4.7 million, Gentex was awarded $1.8 million, BAE Systems Aerospace & Defense Group Inc. was awarded $764,000, and Ceradyne was awarded $729,000. Testing in September revealed that each helmet failed in ballistic and/or blunt force tests. In February 2010 the Navy joined the program and issued their own requirements. Marine Corps officials suggested design improvements such as better materials to industry and testing resumed in June 2010. Three vendors were to be downselected and the remaining two would be tested in November. If the program proceeded as planned the Army would acquire 200,000, the Marine Corps would acquire 38,500, and the Navy would acquire 6,700.

Ceradyne won the competition to produce the Enhanced Combat Helmet in March 2012. On 16 July 2013, the Marine Corps ordered 3,850 helmets for deployed Marines, to be fielded before the end of 2013. The Marine Corps plans to buy 77,000 helmets, enough to outfit a large contingent of deployed Marines. When they return, they will be turned in. The Lightweight Helmet and Modular Integrated Communications Helmet will still be used for training and noncombat purposes. PEO Soldier also confirmed that the Army will field the helmet. Fielding will begin after the start of FY 2014 on 1 October 2013.[5][6]